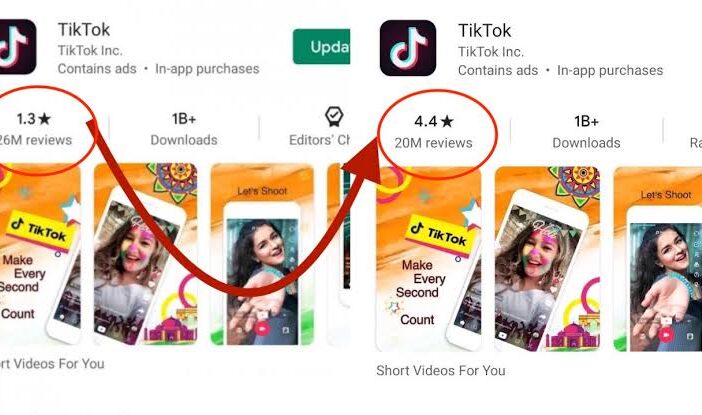 The recent TikTok’s controversy has now gained huge interest in the public. It has sparked new debate as it directly questions the rights of freedom of speech and expression.

Article 19(1)(a) of the Constitution of India guaranteesthe same. Every citizen has the right to express his/her feelings and views.

It also enumerates the right to express one’s own opinions and views at any issue or subject matter through any medium, e.g. by speaking, printing, books, movies, plays etc.

In the case of S. Rangarajan v.P. Jagjivan Ram 1 ., it was held that, on any issues of general concern, everyone has a fundamental right to form his opinion.

Also, Article 19 of the Universal Declaration of Human Rights (UDHR) 1948, states that freedom of opinion and expression is the right which every individual has to seek, receive and impart information and ideas, which also incorporates freedom to hold views and opinions without interference,through any media and regardless of frontiers.

THE SIGNIFICANCE OF REVIEWS

It pushes a person from the buyer’s stage and makes it understand its experience so as to make him aware as to what would be the approximate product result.

It is now one of the basic practice in commercial as well as domestic business to ask for feedbacks from the customers to serve them better in future. Reviews has a remarkable impact on one’s choice.

People trust reviews as if it is a personal recommendation. Honest reviews are the best way to know about the business as it helps to determine whether the person is making a right choice or not

A consumer’s decision to download or not download an app significantly depends on the app’s ratings and reviews.

A recent Research by “Apptentive” had shown that almost 50% of mobile users won’t consider downloading any app whose ratings are below3-stars.

That goes to 85% for an app having 2-star rating. The research also shows thataround 77% of people like to read at least 1 review before deciding to download any free app.

As Google is one of the most used and trusted search engine not only in India but also throught the world, people are willing to give that same trust and credibility to Google reviews that they give to reviews from trusted peers.

Reviews are the benchmark of app quality and users depend on it to be authentic and relevant. It should neither be manipulated nor be modified.

It must reflect the original content of the reviewer so that the customers can get honest direction.

THE REASON BEHIND REPERCUSSIONS OF TIKTOK

The recent backlash TikTok has experienced in India has sparked a new chance tospeak against the short video giant TikTok.The rating began downgrading when a TikTok user Faisal Siddiqui posted a video which glorified acid attack.

The Head of National Commission of Women took cognizance of the matter and said in an Interview that she strictly believe that the TikTok should be banned in Country as she mentioned that apart from the objectionable videos it is also heading youth to unproductive life.

Also, the recent trend of YouTube vsTikTok made a famous YouTuber post trolling TikToker Amir Siddiqui on his statements. The video later got deleted having millions of views which increased the rage of its supporters.

There were previous attempts also in India to ban the TikTok app. It was even banned by Madras High Court in April 2019, saying it was encouraging Pornography as children were vulnerable to exposure to sexual content as various questions were raised on its poor content moderation policies.

Apple and Google also took down TikTok from their app store and play store respectively. However, the ban was lifted 3 weeks later on the ground that India lacks specific legislation unlike the United States’ “Children’s Online Privacy Protection Act, 1998” for protection of children online.

Thus, due to the lack of online child protection law in India, TikTok was back on Google Play and App store.

Due to this reason people were forced to stay quiet and face the consequences of the app in India. Things went quiet well for some time.

But, after the Faisal Siddiqui’s video, people lost their patience and thousands of outraged people used this opportunity to expose various other kinds of mishappening and problematic content on the app.

TikTok is regularly accused of being a hotbed for hosting content that promotes sexism, violence against women, animal abuse, patriarchy, religion based discrimination and fake news etc.

As, India lacks the proper legislation, going into court for banning it was not an option. So, people used the feedback method to express their views.

Thus, as people now realized that there is a platform to express their views, they began mass rating and reviewing.

It was not to spam TikTok but to consider the valuable feedback of the general public and take necessary action.

The result was that within a short time span, TikTok’s ratings fell from 4.5 to just 1.2 stars. Even after such an enormous response, google didn’t intervened in it and didn’t took action against the app.

On the other hand it deleted all the negative reviews posted during that time and became successful in bringing back its previous ratings within 3 days.

There are various google policies which oppose manipulation of reviews by the developers of the business or app, but now Google itself is manipulating it.

A Google’s spokesperson said that it deleted negative reviews as a corrective measure to prevent spam abuse.

It justified its actionby giving reason that several fake accounts were created to post negative reviews for the app therefore Google intervened in the ongoing TikTok debacle and deleted all the negative comments.

A movement where the general public of the democratic country used a peaceful and legal way to express their views and avail their Freedom of Expression guaranteed to them, was termed as Spam abuse.

At times TikTok and Google has refused to entertain the problems faced by people through the application.

Even, the Indian politician Maneka Gandhi, asserted that TikTok as well as the its executive who looks after the app’s operation in India has not taken into consideration to the feedback and also declined to take down derogatory videos and make people liable who posted those clips.

Google by deleting TikTok’s negative reviews violated the fundamental rights of citizen to freedom of expression even in the world’s largest democracy.

We now live in a stage where people have right to criticize Hon’ble SC’s Judgement but didn’t get a chance to write against a pity app which is destroying today’s generation.

Google at times has failed to consider notions of the people and also committed serious blunders. It many a times had contradicted its own statements.

At this Google Inc. countered that complying with the order would affect the freedom of speech and expression and will also be against public interest.

Google mentioned that it can’t remove the content which it doesn’t own or control.

However, now it contradicted its own statement by deleting millions of negative TikTok reviews which even complied with its policies.

Also, it created a big blunder by not only deleting fake reviews from fake accounts, but also genuine reviews from original accounts.

Horribly, it didn’t take down any positive review from fake accounts.On the contrary, Apple’s app store review policy is very much susceptible to outside pressure.

Many a times Apple has responded positively to the feedback of the users. One such was of the Manhattan Declaration App.

Shortly after its launch a petition with just 7738 signatures was sent to apple to remove the app.

This made apple reverse its decision and it took down the app from App store. This depicts how Google has acted arbitrarily and failed to act according to the responses of its end users.

Now, there are various judgements which also recognised online free speech in India. One such case is Shreya Singhal v. Union of India 2 the court held that article 19(1)(a) of the Constitution of India also guarantees,the Right to freedom of Speech and expression to the citizens of India through the Internet also.

The article concludes that Google by deleting TikTok negative reviews has clearly violated the citizen’s right of freedom of Expression. For that it also stated malicious and unreliable reasons to justify its act.

However it completely failed in it. Now the time has come to give due importance to the feedback of the end users.

Also, there is ardent need of a specific law in India for regulating Children’s online privacy as well the reviews and ratings should be taken seriously so as to maintain a healthy atmosphere.

The customer feedback will be of no use if it isn’t considered seriously.So, it’s time to fully extend the values that have protected freedom of expression online.

“If freedom of speech is taken away, then dumb and silent we may be led, like sheep to the slaughter.”